by Federal University of Paraná, Brazil.

The SuM/BR team, responsible for " The Kitchen Challenge", congratulates all the challenge participants, especially the winners.

The final step of crowdvoting with the participation of the vote:

- The Advisory Board from Sustainability Maker Project;

See who are the winners: 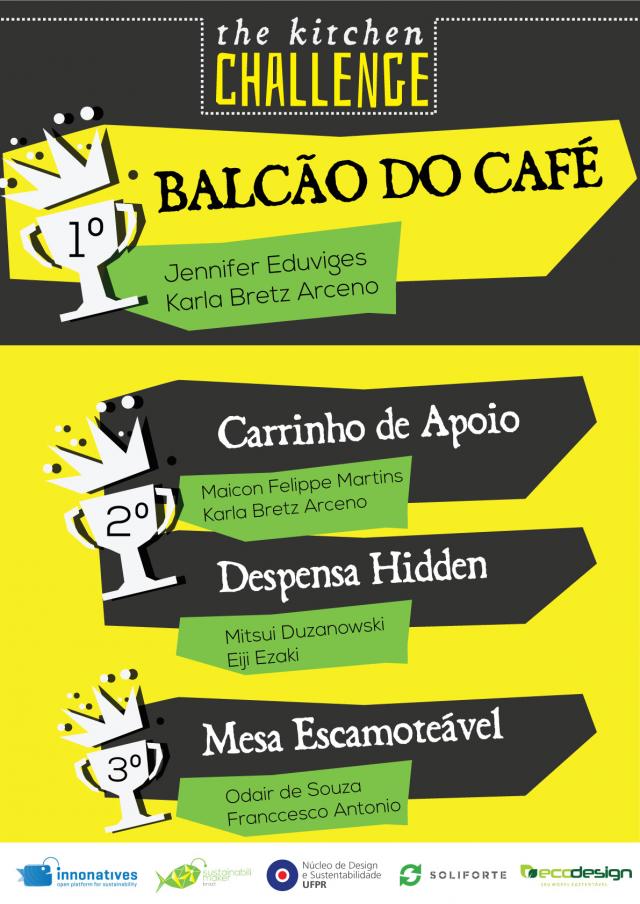 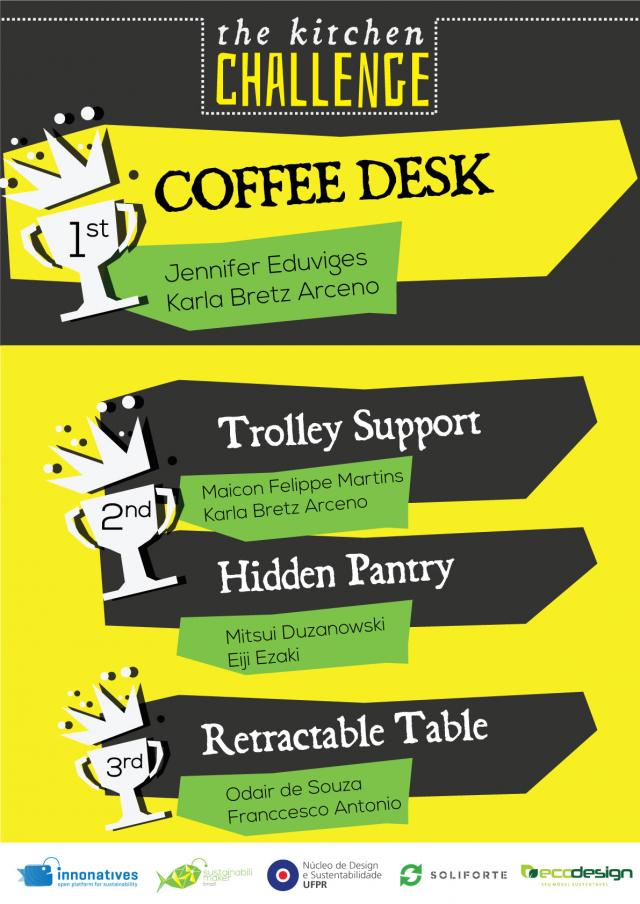 IMPORTANT: Guidance for the winners

Dears winners, from now, you should note the following guidelines:

- Send an email to sum.ufpr@gmail.com, copy to ecodesign@lojaecodesign.com.br until on 02 March 2015. In it, write "Winner - The Kitchen Challenge" at the subject. In the body email you should to identify yourself, with your full name, and send PDF files for the three phases of the challenge. The Company EcoDesign will return this email, and you'll start contact with the company that will produce your product.

- Send an email to sum.ufpr@gmail.com, until on 02 March 2015. In it, write "2nd place Winner - The Kitchen Challenge" at the subject. In the body email you should to identify yourself, with your full name, and send PDF files for the three phases of the challenge. The SuM/BR team will return this email with the necessary instructions.

- Send an email to sum.ufpr@gmail.com, until on 02 March 2015. In it, write "3rd place Winner - The Kitchen Challenge" at the subject. In the body email you should to identify yourself, with your full name, and send PDF files for the three phases of the challenge. The SuM/BR team will return this email with the necessary instructions.

The kitchen space of a low income house in Brazil often works as dining room and a living room. Indeed, it is quite common for people to eat their meal on the kitchen or using the space to chat with family members or neighbors. These moments are quite important because it is when social cohesion is built within the family and with the surrounding community.

It is in the kitchen also that many families earn extra income by producing meals or snacks to be sold around the community. Sometimes it is even possible to witness children developing their school work on the kitchen. However, despite that this is an everyday reality of this people the built environment and the artifacts within the kitchen are not designed for such wide variety of activities.

In Brazil, low income houses have typically an average of 42m2 and around 6m2 being intended for the kitchen. If the kitchen space is already quite small for the family members, how will it also fit visitors?

We believe there is somewhere an idea to change this reality and make the kitchen a more comfortable and flexible place. To help you to get ideas, we provide the reports with more information about the problem we're talking about.

There are two brazilian companies that sponsor this challenge: Soliforte and EcoDesign.

EcoDesign is a small company in Curitiba. Its core activity has been on extending the life cycle of wood waste through the production of furniture. Its organizational structure includes a small factory and shop attached to it. The commercialization of their products occur mainly through the web.

This challenge has three phases: the first is to send ideas, i.e., a sentence that explains what you thought to solve the problem. The second is to send the concept, i.e., the most elaborate idea with more details of how the solution will work really. The third and final step is to send the solution itself.

In order to be considered by both the expert panel and the community in the selection process, the proposed solution has to:

During the selection of the submitted ideas, the criteria that will be mainly considered will be:

The best solution implementation will be viable by the companies EcoDesign and Soliforte. Together, they will produce a prototype that will be tested in one of the residences of the Águas Claras Community. In addition, the solution will be available with Creative Commons license.

As first prize, the participant who submitted the best solution will have his product manufactured and marketed trough EcoDesign e-commerce platform. The winner will receive 50% of the profit from sales of the product and a certificate of participation.

The second and third best solutions will receive a Sustainability Maker kit, and the certificate of participation.

8. The SuM/BR team and the Águas Claras Community:

Sustainability Maker Brazil (SuM/BR) is a project carried out by the Design & Sustainability Research Center (NDS) of Federal University of Parana (UFPR), Brazil. The SuM/BR team is composed by:

The team worked on field since april 2014 to unveiled urgent problems that could be tackled on a sustainable way. Águas Claras is the partner community, located on the municipality of Piraquara, on the Curitiba´s Metropolitan Region, State of Paraná.

Around 500 people lived on this low income community. The urban area was not formaly designed from the outset and the houses themselves were built using local workers or even built by the families themselves. The house are generally built on timber with some of them being produced using masonry. Do it yourself is a well spread habit although carried out without the support of proper tools or training. Materials and tools are re-used and recycled according to everyday life necessities. People often get furniture or construction materials for free from family members or neighbours: furniture is often old and out of proportions if compared to their house dimensions.

During a period of three months the Brazilian SuM team of the Design & Sustainability Research Center have interacted with this community in order to identify what they perceived as their key problems on the household. On this process the team used direct observation (through guided tours in each house), conversational interviews, photographs/videos, storytelling and “paparazzi” (self documentation through photographs). After this process a set of four key problems were identified and, subsequently, they were submitted to a voting process using both an web-based approach as well as a conventional approach (ballot box). The problem “The space in my kitchen is too small in order to me to receive visitors”  received the highest number of votes.

The comments are closed.

View all ideas
View all concepts
View all solutions